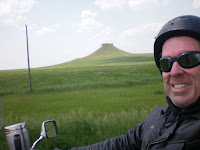 Well, here I am cruising across the wide expanse of North and South Dakota. I learned something today about the two states… they both look alike, but one is called North and the other South.

The monument off in the distance looks like Devil’s tower, but it isn’t. Let’s just call it the Devils Tower look alike.

I traveled about 500 miles today. It was nice and straight and fast going across North Dakota via I-94. I had a lot of company on the interstate. But as soon as I started heading south I was in no-man’s land and felt very lonely and vulnerable. A few times along some lone and lonely stretches of road I started freaking myself out playing the what-if game. What if I had a flat? Or, what if I hit something? There is absolutely no one and no services for miles and miles. There were some stretches of highway that I didn’t see another car for about half an hour or more, both ways. 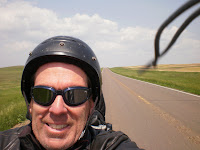 Here’s me, with no cars in sight. 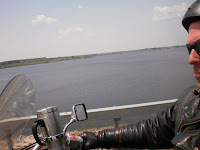 Here’s me next to a lake with no cars in sight. 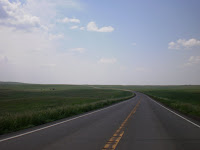 Here’s a stretch of road, with no cars in sight. 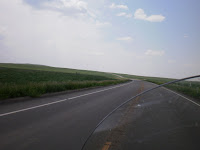 Here’s a bend in the road with no cars in sight. 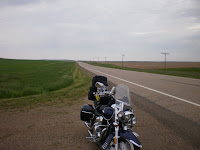 Here’s my bike, with no other cars in sight. I had to stop for a potty break. I didn’t need to worry about being discreet, because, you guessed it, there were no cars in sight. 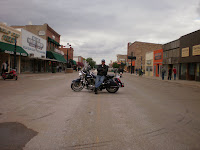 Here’s me in downtown Sturgis, with no other bikes in sight. A stark difference from the August Bike Rally.
Other than being a lonesome man on a lonesome highway today, the drive was quite pretty. A lot of wide openness of nothingness. It’s interesting to see how each state has it’s own uniqueness and beauty.
Tomorrow, I’ll point my bike once again toward the western horizon, hoping that some day soon I will find home again.
See you tomorrow!