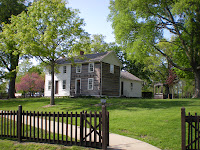 Today I peered into the hearts and souls of a God-fearing people, as I walked the streets and visited the homes and shops they once occupied. These were a people driven with a conviction so strong that they would do anything for their God, even die for Him, something rarely seen today. 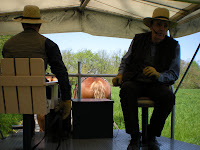 I learned of their sacrifices and trials, as related by Elder Warnick from Hinckley, Utah, as I rode in a horse-drawn carriage by the 4 acre homesteads of Nauvoo. At one point the carriage stopped in a quiet grove of trees and our group of twelve sang “I am a child of God.” The tears flowed and my heart swelled as I realized how blessed I was.

At the Nauvoo Visitor’s Center, I was touched by the simple testimony of a sister missionary, from Meza, Arizona, as she bore witness of the divinity of Jesus Christ and the important role that Joseph Smith played in the restoration of His Gospel. 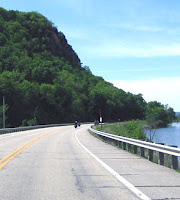 After a serene 30 minute motorcycle ride along the eastern shore of the great Mississippi river, I was in Carthage, Illinois. During my ride, I pondered what Joseph and Hyrum must have felt as they rode on horseback to Carthage, a day’s trip of about 21 miles, knowing that they would not be returning to their loved ones and friends. 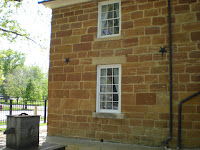 As I sat in the upper- room of the Carthage jail, with a bullet hole still in the original door, my imagination heard the reverent song of Willard Richards, as he sang “Poor Wayfaring Man of Grief.” What valiant men Joseph and Hyrum Smith, John Taylor and Willard Richards were? They lived their convictions and sealed their testimonies with the deaths of Joseph and Hyrum. 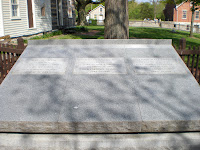 On my way back to Nauvoo, I walked the sacred ground of the burial places of Joseph Smith and his brother, Hyrum. I sat on a bench, all alone in the cemetery, and pondered their lives and what that meant to me. If I ended my trip today, I would have already received more than I came for.

“Ah, Nauvoo, thank you for what you have taught me today.”