↓
I traveled only 343 miles today through some beautiful country side, between Lake Michigan and Lake Superior, and crossed the northern border into Canada. Upon reaching the Canadian Customs window, the officer asked me a ba-gellion questions. I think I was profiled because I was a biker, hadn’t shaved for 4 days, looked mis-givious and hesitated on a couple of questions he asked me. There was one question he asked me three times during the interview process, and that was “Do you have any guns or weapons?” I wasn’t packing, so I told him “no sir!” After the third time, I think he was convinced.
He also asked me a stupid question, but I didn’t tell him it was stupid. He asked “Is anyone else riding with you?” I smiled, looked at my empty passenger seat, and said “no sir…here’s your sign.” (Jeff Foxworthy) He frowned back at me and said “Here’s your passport, have a good day.”
I just love people! 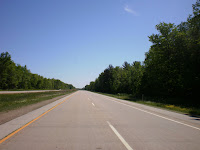 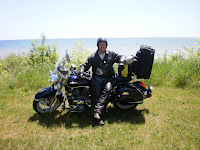 On the shore of Lake Michigan. 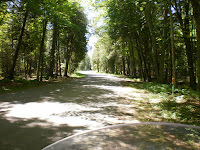 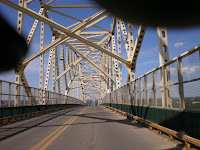 Crossing the bridge over the upper tip of Lake Superior and into Canada. 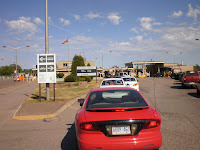 Waiting in line at the Canadian border to show my passport. I don’t know why, but I felt nervous and guilty, wondering if they will let me through. I had nothing to hide or to be ashamed of, but still was a little nervous. 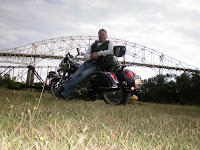 Behind me, the bridge I crossed over to enter Canada. Awe, my nervousness and guilt finally gone.

I’m spending the night in Sault Ste Marie, Ontario Canada, on the banks of Lake Superior. So far the weather has been pretty good. Today was a beautiful day, in the 70’s. Right now, as I’m gazing out my motel room window, it is raining, but I suspect it will clear by tomorrow. Let’s hope anyway.
Speaking of tomorrow, I’m looking forward to some more beautiful frontiers as I head east across Canada.
See you tomorrow!