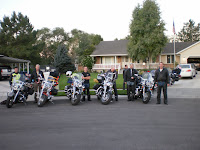 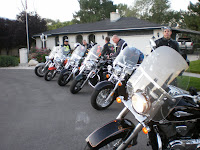 We were up and early this morning to start off on our journey. The temperature was cool and crisp as we headed north on I-15.
Our first gas stop was Snowville, Utah. 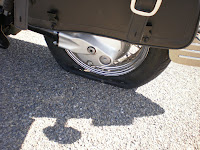 after leaving Snowville, Brant felt something strange, a feeling that caused his heart to come up out of his throat. His bike pulled to one side and then the other. He wasn’t quite sure what was the problem, but he knew that something was not right. He quickly came to the realization that his back tire had gone immediately flat and he was now trying to safely pull his bike to the side of the road.
After spending countless hours trying to get a tow truck out to haul his bike into Burley, Idaho, some 60 miles away, he finally found a good ‘ol Idaho boy that would do it for $250. Brant swallowed hard, and told him to come out.
In the meantime Pete was in contact with some in-laws in Burley that were willing to come out and get us, so Brant called off the tow truck, and we waited for the in-laws to come rescue us. 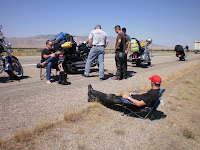 spending 4 hot (100 degrees) hours at the side of the road, we were on our way to a Motorcycle shop in Burley to repair the flat.
One side note: Since Brant’s bike was temporarily out of commission, Brant and Jared became very close friends, sharing Jared’s bike. 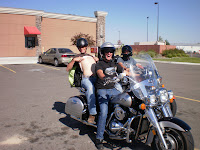 After the tire repair and a “Carl’s Jr” burger, we were on our way. We went as far as Ontario, Oregon (425 miles) and are staying a the Neat Retreat RV park. We all had hot showers (Actually mostly cold) and are snuggled into our tents for the night.
Tomorrow, on to Mount Saint Helens.