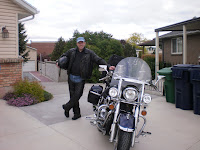 I left this morning at 8:00 AM and decided to change my route and took I-80 heading east through Wyoming, instead of I-15 north to Bozeman, Montana. That was a good decision because I was talking to a couple who was checking into the motel tonight, and they had just come from Cody, Wyoming this morning, and said they had talked to several bikers who had come through Yellowstone indicating that they had snow there last night. (Sorry for the long, dis-jointed sentence. I just kept typing as I was talking) Makes me feel good when I make a good decision every once in awhile. And that doesn’t happen often. 🙂

When I left Salt Lake City this morning the temperature was in the mid forties, so I decided to put on my heated clothing. Between Salt Lake and Rock Springs the temperatures dipped down into the 30’s, so I stayed toasty warm.

I had a tail wind of about 50 to 60 miles per hour that pushed me most of the way, until I got to Laramie, Wyoming, then it started coming from the north. So I fought a cross wind for about 150 miles, drove through some rain for about 45 minutes, and ended up in Sidney, Nebraska for the night. Total miles for the day was 563.
Sidney, Nebraska is the corporate headquarters for Cabela’s Hunting and Fishing Retail Store. They have a huge complex here. Sidney is listed in the top 100 of America’s best rural communities, with one of the highest employment rates in the country. I guess we can thank Cabela’s for that one.
Speaking of Nebraska, did you know that it is still a law on the books here, that it is illegal to go whale fishing in Nebraska? Go figure.
Well (Whale, no pun intended), I’ll see you tomorrow.