Pulled away at around 9:00 AM this morning and needed to make two stops before hitting the road. The first stop was to a local Mac store. Last night when I went to plug in my AC adapter for my Mac Book Pro laptop, I noticed the little plug attachment was missing. (Those of you who own Mac’s know what I’m talking about.) Without this attachment the adapter can’t be plugged in. I looked everywhere for it and finally determined that I must have left it at the hotel from the night before. So I found a Mac store and pick a new one up.

My next stop was to a local hardware store to pick up some 16 gauge wire and some “little wire twisty things” for connecting two wires together. I needed to make my quick-fix wiring job on my motorcycle a little more permanent and a better quality fix.
So, I picked up those two items, re-fixed the wiring on the bike, and headed southeast to begin my trek through six states. Yes, you heard that right. Six states, all in one day. I can report that I accomplished that goal. Can any of you other hard-riding bikers out there claim this goal?
Here’s a recap of the states: Started in Vermont; Drove through New Hampshire heading for the southeastern corner of Maine; Saw the Atlantic Ocean from the shores of Maine; Headed south back through a part of New Hampshire, then through Massachusetts (Big mistake going through Boston! Bad traffic. It took me 2 hours to go 10 miles, and at times my temperature gauge read 103 degrees. I was dying!) Then swung below the Massachusetts border to drive through Rhode Island and Connecticut. Then back up into Massachusetts, where I am spending the night in Springfield, Massachusetts, home of Homer Simpson, as well as the birthplace of Dr. Seuss and basketball.
Except for the hot bumper to bumper traffic in Boston, today was a pretty good day. I logged just over 350 miles, including the 2 hour 10 mile part in Boston. 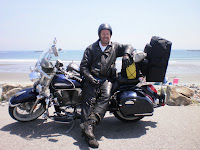 On the shores of York, Maine, overlooking the Atlantic Ocean. 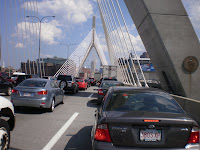 Stuck in traffic. This picture was taken crossing over the bridge into Downtown Boston. If you look really close on the right, you can see the Arena, called The Garden, where the Celtics play. 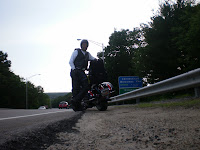 Crossing into Connecticut. It was hard to get my picture in front of each state sign, because most of them were on bridges or had no place to pull over. 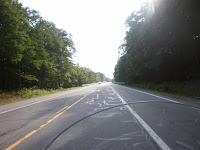 In all the states traveled today, they looked pretty much like this…lots of trees and green.
Tomorrow I should make it to Palmyra, NY, where I plan on staying for a few days and attend Church on Sunday. This will be my third trip to this area. Looking forward to revisiting some very special places.
The forecast for tomorrow is rain. But, I’ve heard that before, and for some reason I’ve avoided the rain. (Someone is looking out for me…thanks!)
See you tomorrow!