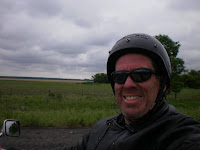 Last night I decided to check my bank account online and noticed that I had two identical charges of $95.57 for two consecutive gas stops. At first I thought that someone had stolen my card number some how and charged these amounts at the two gas stops that I made. But that didn’t make sense. Why would someone follow me to the next gas stop and charge $95.57 again?

Well, I spent about an hour and a half with Chase Bank, talking to some guy in India. (Don’t you love that?) And explained what I think may have happened. Since I’m in Canada, the charges there go through an exchange into US dollars. Curious about the exchange rate, I looked up the rate for that day. Guess what? It was exactly.9557 per Canadian dollar. After explaining that to my India friend, he said “Mr. Stone, I can’t do anything about it until those charges are finalized, because they are still pending.” Well, why didn’t he explain that to me before I expended an hour and a half of my time jaw-boning with him?
Then he proceeded to let me know that they could cancel that card number and issue me a new one, that would take two weeks to be sent to my home address. I asked him if he could figure out a way for me to still use my card since I am still on the road? Long story short, they didn’t cancel my card. I’ll have to work it out when I get home. Arrrrgggghhhh!
Okay, deep breath.
On to today’s journey.
I set my GPS for the birthplace of Joseph Smith in Sharon, Vermont. It ended up setting my route as direct as possible, taking me through all the backroads of Canada, New York and Vermont. Although the drive was break-taking, it took me much, much longer than normal. I left Pembroke, Ontario at 9:30 AM and pulled into my hotel for the night at 8:30 PM. That’s almost 12 hours on the bike. 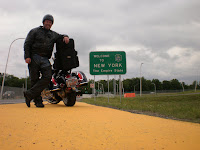 I did end up losing 2 hours for a minor repair to the bike. I was waiting in line at the Canadian/US border, again nervous as usual. I don’t know why I feel nervous crossing a country border? Happens to me when flying somewhere too. I guess I feel like they are going to arrest me and throw me in jail for now good reason. You know, they do that to some people. 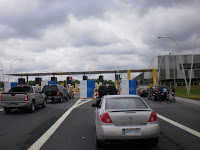 Anyway, while I’m waiting nervously in line at the border, my bike just quits. There was absolutely no electrical–no ignition, no lights, nothing. So I walked it off to the side of the road and started checking everything, fuses, wires, etc. I took my seat off and was checking everything around the battery. Finally I found the culprit…a wire connector was fried. Tracing the wire, it was the main ignition wire that provided juice to everything that comes on when the ignition key is turned on. After determining the problem, it was an easy fix. I just bypassed the connector and spliced the wires together. But it took about an hour to find the problem.
As I climbed back on the bike I started to diagnose the cause of the fried connector. So I started counting everything that is powered through the ignition circuit. Aside from the common things, like headlight, cooling fan, spark plugs, I counted a total of 14 addition lights. (highway lights, hard bag lights, turn signal lights, license plate lights, and tail light. Hmmm, maybe I’ve hooked up to many accessories? Well, I turned off my highway lights to protect the rest of my wiring. I’ll have to figure out a different set-up when I get home. (Just in case you are wondering why I have so many lights hooked up…I read some where that if you are well lit, you have a lower risk of getting hit by someone who didn’t see you coming.) 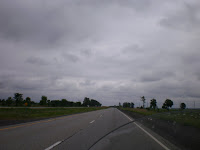 After crossing the border, I drove through the upper pan-handle of New York State, then down through Vermont. All beautiful countryside.
I stopped at the birthplace of Joseph Smith. Great feeling there.
Here are some pics I took there: 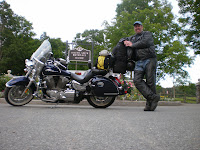 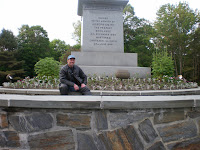 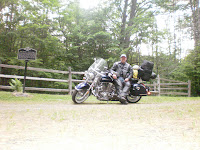 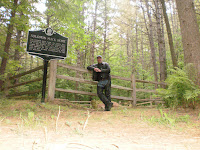 I’m spending the night at a place called Whiteriver Junction in Vermont. Tomorrow I’ll be heading towards the eastern coast to hit Maine, Massachusetts, Connecticut and Rhode Island. I’m not sure if I’ll be able to get them all in in one day, but I’ll try. I just need to ride through them to check them off my list.
See you tomorrow!