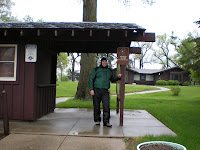 With eight hours of riding in the rain, it seemed as though the rain clouds were tied to the back of my bike and followed me wherever I went.

My first stop was at Grand Island, Nebraska, also known as Mormon Island, a winter stopping point for some of the Mormon pioneers. It was also here, not the island part, but the city of Grand Island, that Adam Anderson, a son in law, was born and raised. After visiting with some of the locals here, I now fully understand where Adam got some of his behaviors.

My second stop was Winter Quarters, in Omaha, Nebraska, a very important layover during the years of 1846 and 1847, for the early pioneers. 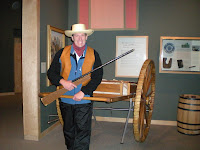 After feeling grumpy about having to travel in the rain all day, a dear sister missionary serving in the Winter Quarters Visitor Center, helped me to understand how lucky and blessed I really was. You see, the first group of pioneers that left Nauvoo in February of 1846 took four months to cross the area known today as the State of Iowa, through snow, rain and an early spring thaw, producing deep mud that was extremely difficult to navigate wagons through. Because of the length of time it took to cross Iowa, and realizing that it would be too late to continue on into the Salt Lake area, Brigham Young set up a camp called Winter Quarters. It was here that thousands of pioneers made this place home until the spring of the next year, to continue their journey west.

Winter Quarters was organized and laid out just like a normal city, with 14 streets, 38 blocks and over 760 lots and stockyards, with houses ranging from two-story brick homes to sod huts. Nearly 12,000 saints occupied this area at one time or another. It became a temporary headquarters for the church, until their arrival into the Salt Lake Valley. 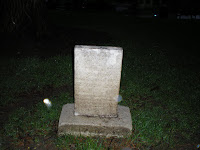 Due to the extreme hardships of cold and lack of provisions, one in twelve people died in Winter Quarters. As I walked through the Winter Quarters cemetery this evening, where some 2,000 people were buried, I realized that I was walking on some very sacred ground. These pioneers sacrificed much, running from persecution, they united themselves together in their new-founded religion.

In the future, when I catch myself complaining about my hardships and trials, I’m going to remember those courageous early saints that taught me about sacrifice.