As I awoke this morning, I was determined to conquer the toll road today, in order to make my journey eastward through Indiana and Ohio. I set aside my 75 cents in an easily accessible pocket, making it easy to zip right through the toll booth with as less pain as possible. As I turned on the I-80 ramp and pulled into the toll booth, I read a sign that said, “Take a ticket, please.” Okay, I can do that. I did that yesterday. I’m experienced at this stuff now. So I took my ticket and rolled down the tollway.

I enjoyed the ride, with mile after mile of farms, barns and galvanized grain storage silos. Everything was green and beautiful. As I crossed over the Indiana state line into Ohio, I approached my first row of toll booths. I had my 75 cents in my pocket, so I was prepared. I handed my ticket to the booth lady, and she said that would be $4.50. Oh no, I had my 75 cents in hand, but had to go digging for more money. I did not realize that you pay for the distance traveled, not just for the road. I turned off my motorcycle, took off my gloves, pulled out my wallet, and paid the $4.50. While she was giving me my change, I turned around to the 10 cars, now backed up behind me, and gave them a friendly wave of “I apologize for the wait.” Some waved back, but not with all fingers. Gee, I never realized before how friendly people are in the northeast.

As I pulled away, I was glad to have Indiana and those stupid toll roads behind me. Ten minutes down the road I saw something that made my stomach churn…another set of toll booths, this time for the Ohio Turnpike. Oh well, I pulled up, took my ticket, now more prepared through experience to handle this annoying part of the east, and headed on my way.

I rolled into Kirtland, Ohio around 5:30 PM and checked into my now favorite Motel 6. This one was a little more expensive, $35.99 a night. I figure with the money I am saving by not staying at expensive hotels, I can buy more chrome accessories for my bike.

After cleaning up, I headed for the Kirtland Visitor’s Center to catch their last tour before closing. The tour was presented by a senior missionary couple from Seattle, Washington. I found out that the husband was a prominent track coach from Washington State. He and I swapped pole vaulting stories. 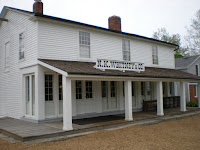 I visited the Newel K and Elizabeth Ann Whitney Home, the Sawmill, the Ashery and the Newel K Whitney Store. I had anticipated excitement as I stepped foot into the Whitney Store, knowing of the sacred importance of the upper floor of the store, as there were 65 revelations in the Doctrine and Covenants that were received by the Prophet Joseph Smith there, as well as the meeting place for School of the Prophets. Having a familiarity with some of the special events that took place in this upper floor, it had special meaning to me. 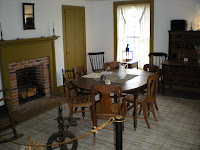 As I entered the room where Joseph Smith and the First Presidency met, which was considered as the Headquarters for the Church at that time, I envisioned Joseph Smith seated around the table with his counselors, as they conducted the business of the Church, where also the Prophet completed the new translation of the Bible. To walk where Joseph walked and to be in the presence of this era of church history was almost more than I could bear. 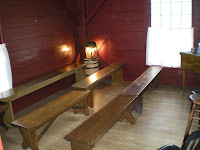 We next entered the room where the School of the Prophets was held. I felt I was walking into the temple. The spirit bore witness to me that many special events happened in this room. We sat down as the sister missionary related an experience that Zebedee Coltrin, a member of the first quorum of the Seventy, experienced in this room:

Zebedee Coltrin added, “I saw a personage walk through the room, from East to West, and Joseph asked if we saw him. I saw him and suppose the others did, and Joseph answered ‘That is Jesus the Son of God our elder brother.’ Afterward Joseph told us to resume our former positions in prayer, which we did. Another person came through. The Prophet Joseph said this was the Father of our Lord Jesus Christ. I saw him. . . . I experienced a sensation like a consuming fire of great brightness, for He was surrounded as with a flame of fire, which was so brilliant that I could not discover anything else but His person. I saw his hands, his legs, his feet, his eyes, nose, mouth, head and body in the shape and form of a perfect man. His appearance was so grand and overwhelming that it seemed I should melt down in His presence, and the sensation was so powerful that it thrilled through my whole system and I felt it in the marrow of my bones. The Prophet Joseph said: Brethren, now you are prepared to be the apostles of Jesus Christ, for you have seen both the Father and the Son, and know that they exist and that They are two separate personages” (Minutes, Salt Lake City School of the Prophets, October 3, 1883, pp. 58-60).

I was not aware that the Father and the Son both appeared to men in this room. I felt moved to tears as I pondered the great and wonderful historical events contained in this small 10 by 15 room on the upper floor of the Newel K. Whitney Store.

Today, I stood where Deity had stood.