Upon my arrival in Independence, Jackson County, Missouri, I was eager to visit the Independence Temple lot, located in the heart of Independence. After checking into my room last night, I drove to the location. 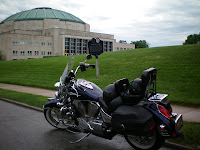 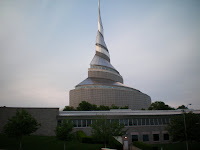 It just seemed odd to me that the Church of Christ and the Community of Christ church have been fighting over the lot for an eventual temple with the express purpose of performing sacred ordinances. Neither of these two churches believe in temple work at all. So what are they fighting over?

The LDS Church owns 20 acres in this area, with the Community of Christ Church owning 60 acres, and the Church of Christ with the temple lot and about a half acre for their building. 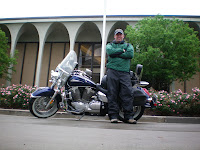 I spent about two hours at the Visitor’s Center, and as always, was filled.

This morning I set out for Liberty Jail, located about 14 miles from Independence, encountering a few rain storms along the way. The reconstructed jail is located on the same foundation stones as the original jail. The jail itself is enclosed within the Liberty Jail Visitor’s Center. 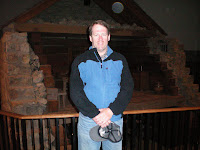 It was a solemn feeling as I entered the Liberty Jail room. My tour guide, a sister missionary, discussed the events which happened there, sharing her testimony of the divine calling of the Prophet Joseph Smith.

The Liberty Jail was a place of painful refining for Joseph Smith and his companions. They spent the bitter winter of 1838-39 unjustly charged with treason while their families and church faithful were being forced from Missouri. Elder Neal A. Maxwell wrote, “It wasn’t until the prophet was physically confined that his mind was fully liberated…The double walls, four feet thick, kept Joseph and his companions in, but they could not keep the spirit and revelation out.” 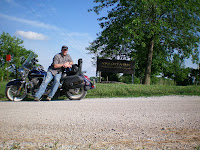 After Liberty Jail, I traveled about 70 miles north, to Adam-Ondi-Ahman. As I entered the property, I experienced similar feelings as I did in the Sacred Grove in Upper State New York. I knew that I was on hallowed ground. 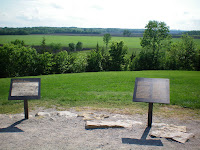 As I sat all alone on a hill overlooking Adam-Ondi-Ahman, I tried to imagine Father Adam, just before his death, blessing his children. It was in this area, that Adam and Eve, when they were driven out of the Garden of Eden, built an altar and offered sacrifices. “It will be in this area, all who have held keys of authority will give an accounting of their stewardship to Adam. Christ will then come, receive back the keys, and thus take one of the final steps preparatory to reigning personally upon the earth.” – Bruce R. McConkie. This is truly sacred ground.

On my way back to Independence, I stopped at Far West. As I had not eaten all day, I thought I would grab a bite to eat at Far West. I had to smile as I drove into Far West. The city of Far West is no longer there. All that remains are the four cornerstones of the Far West Temple site. So I waited until I was back in Independence to eat. 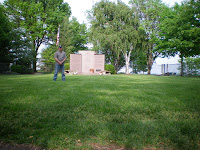 As I stood on the ground of the Far West Temple site, it also felt sacred and holy to me. The sight was dedicated by Joseph Smith and the four cornerstones were laid, but the temple never completed, as mob violence eventually drove the saints out of Far West.

The site itself, sits atop a hill overlooking the countryside. 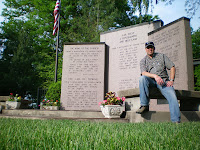 I was alone at this site as well, and left to ponder the history of the Far West Saints. In this area there were an estimated 5,000 saints living here. It was at Crooked River, not far from here, that Joseph Smith, Hyrum Smith, Sidney Rigdon, Alexander McRae, Caleb Baldwin and Lyman Wight were arrested and taken to Liberty Jail to await trial.

Tomorrow, I will continue my journey westward towards the valley of the Rocky Mountains, eager to reach home. Pray for good weather.