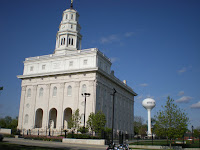 Today was my last full day in Nauvoo. I’m kind of sad in a way to be leaving tomorrow, as I have made many new friends and had many wonderful experiences.

I started the day dressed in white, as I participated in a Nauvoo Temple session. Walking up the front steps of the temple my heart raced as I thought of the early Nauvoo saints who once walked these steps many years ago. The temple had a special spirit to it, an endearing one. 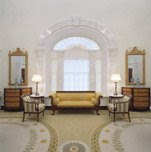 After completing the session and in the Celestial I sat down in a chair and picked up a Doctrine and Covenants from the table. I began to read the sections that mentioned Nauvoo. For a moment or two, I was taken back in time, as I read the word of the Lord and the counsel of the Prophet Joseph Smith to the Nauvoo saints. I felt I was there, reliving the feelings and the testimonies of those stalwart saints. 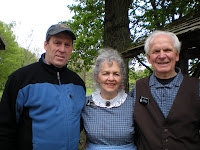 After the temple, I spent the rest of the day visiting the various shops and homes of the early saints. While at the Browning Gun Shop, (The well known Browning guns were designed by Jonathan Browning, a Mormon) I was guided on my tour by Elder Fletcher, a name that had a familiar ring to it. At the end of the tour, I learned that he was from Long Beach, California, the place of my birth and early years as a child. I now remembered why the name sounded familiar. I had taken piano lessons from his wife when I was 10 years old. Upon learning that his wife was just down the street at the bakery, I made hast and enjoyed a warm reception with her. 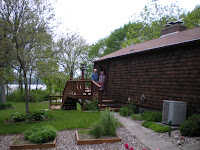 The Fletchers were gracious enough to invite me over for dinner. They have a beautiful four-acre home located on the banks of the Mississippi River. It was wonderful to have a delicious home-cooked meal after eating out at fast-food and diner restaurants, and reminisce with them of the good old days.

I ended my afternoon at the Nauvoo Visitor’s Center to watch the movie, “Joseph Smith, The Prophet of the Restoration.” I was the only person in the 200 seat auditorium, as the tears flowed with my renewed appreciation for a marvelous man. I love the Prophet Joseph Smith!

Before coming to Nauvoo, I had heard people say “you’ll never be the same after visiting Nauvoo.”

I now understand why…