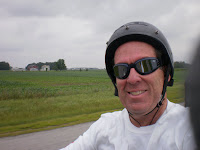 After a tearful goodbye to my sweetheart this morning, I set my GPS for Bismarck, North Dakota, a little over 1,100 miles from Cleveland, Ohio. Why Bismarck? Because I missed North Dakota on my trip out, due to weather conditions, and it is the last state to check off my list of states I’ve driving through. (Except for Alaska)

I’ll drive through North Dakota tomorrow, and then my lifetime goal will have been accomplished. (Of course, except for Alaska. I just might do an Alaskan trip next year) I don’t think many motorcyclists can lay claim to this goal.
When I got up this morning and looked at the weather forecast, it called for rain, not just a chance of rain, but a pretty darn sure amount of rain. So I thought should I put on my rain gear first thing this morning, or wait and suit up later. I decided for later.
And you are not going to believe what happened today. Not a single drop of rain. There were several times during the day, I would look to my left and see dark rain clouds; and I’d look to my right and see dark rain clouds; and I’d look straight ahead to no rain. Thanks to all your prayers and faith, I have not had an increased risk of riding through rain. Someone up above has been looking out for me.

Today I logged 562 miles. I could have probably done 700 except for the darn toll booths. (See my comments below) 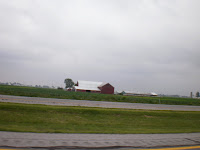 I drove through four states today: Ohio, Indiana, Illnois and Wisconsin. Once away from the metropolitan cities, I drove mostly through farmland.

Okay, now for the toll booths. Can I just say how much I truly dislike toll roads. They are a real pain. Most of the problems I had was on the Ohio Turnpike. About every five to seven miles, on the interstate, I would have to go through a toll booth, stop my bike, put it in neutral, dig in my wallet for a couple of bills, sometimes only 50 cents, and pay my toll. Aren’t the interstates funded by federal money? If so, then why are these states (Mostly the eastern states) so hung up on toll roads. I think toll roads are way outdated, and a very inefficient way of moving traffic.
I am so looking forward to our western highways, where I can roll down the road, uninterrupted, and stop when I want to stop, and not be inconvenienced with these inexcusable toll booths! There, now I feel better.
I stopped for the night in Wisconsin Dells, the World Capital of Water parks. Everywhere you turn in this town, there is a water park. They claim to have the world’s largest indoor water park called “Noah’s Ark.”
The only water park I’m going to enjoy tonight is the hotel’s hot tub.
See you tomorrow!