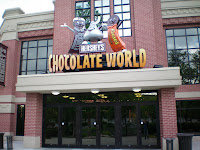 Up early and off to the Hershey Factory to engulf myself in chocolate. Milton S. Hershey began the Hershey Company in 1894, when he decided to produce a sweet chocolate coating for his caramels. Previous to this discovery, Mr. Hershey was nearly bankrupt by the age of thirty, but continued on to become one of the wealthiest men in America.

With his rapidly growing successful company he built a community around his business and naturally named it the town of Hershey. Last night I ran into one of the locals who grew up in the town of Hershey and he told me that he worked at the Hershey Factory, and that his parents and grandparents had all worked at there. Back in the early days of the Hershey business, his mom hand wrapped the Hershey kisses, doing about a thousand kisses per day. If I did a thousand kisses per day, my kisser would be worn out. 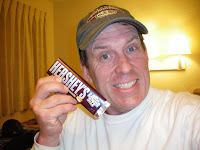 After taking the Hershey tour I indulged myself in some chocolate morsels before climbing on the iron horse bound for the big city of Washington DC. Upon my arrival to the DC area, I checked into a motel in the Capital Heights area, and yes, it was a Motel 6. I think I might by some stock in the motel.

The area must have a high rate of crime, as there was a 24 hour security guard parked outside the front door of the office.

As I parked my bike, I asked him to keep an eye on it for me. He said he would be there all night. I think I feel safe.

I did learn that I am a minority in the area. I stopped at a Home Depot next to the motel for a bolt that had fallen off my bike, and realized that I was the only white person in the whole store.

After unpacking, I headed for the Washington DC National Mall, where all the main monuments were located. 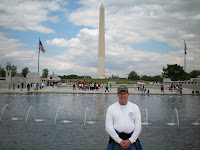 My first visit was the Washington Monument, a huge obelisk, with a colonnaded base and a lot of bricks. Construction began on the monument in 1848, but was halted due to a lack of funds and the Civil War, and was finally finished in 1885. It is interesting; you can see two different color bricks from the two construction periods. 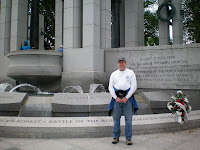 Next I approached the World War II Memorial with great reverence and respect for my Dad and Father-in-law, who both served valiantly in this war for my freedoms. My Dad was the 2nd wave of troops to land on Normandy Beach, wading through blood-colored water and floating bodies. It was difficult to get my Dad to talk much about the war, as it wasn’t a pleasant memory for him. 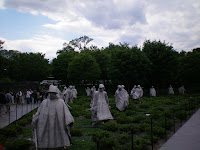 It was then on to the Korean War Memorial. At this memorial all I could think about were all the Mash episodes, and then I moved on. 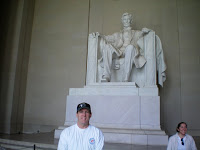 At the Lincoln Memorial, although crowded with visitors, there was a quiet respect present. Abraham Lincoln is seated majestically overlooking the reflecting pond below, with excerpts from two of his famous speeches on opposite sides of the memorial—his Second Inaugural Address and his Gettysburg Address. In reading these excerpts, it was profoundly evident to me that he had a strong belief in God and Divine intervention, something lacking in national leadership today. 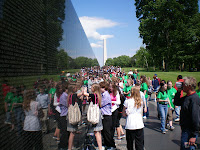 The Vietnam Memorial Wall always brings a special feeling as one walks past the 58,195 names of the deceased soldiers inscribed on the dark granite, with flowers and personal messages left by the wall from loved ones and old army buddies. Setting aside the controversy of an unpopular war, this wall is a tribute to the lives of the men and women who died fighting for our freedoms. 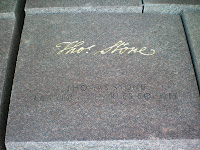 On my way to the National Archives, I stumbled upon an infrequently visited memorial, located next to the Constitution Gardens, called “The 56 Signers of the Declaration of Independence Memorial.” Here is displayed a memorial granite stone with the signature of each signer of the Declaration of Independence. I found my ancestor’s granite stone and signature, and took a moment to ponder what it must have been like for him to attach his name to a document that put him and his family at risk of death. I’m grateful to Thomas Stone, and his family, for their sacrifice for my freedom. 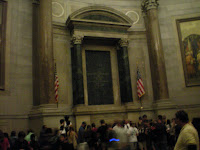 I waited in line at the National Archives for an hour and a half for an opportunity to gaze upon three very important documents; The Declaration of Independence, The Constitution and the Bill of Rights. As I inspected the Declaration of Independence closely for any secret clues, I was able to detect a clue as I looked through my special infrared camera lens at the document. It said “The mother lode is located in the Granddaddy Basin of the Uinta Mountains.” With that, I’m looking for our next backpacking trip.

While in the National Archives I ran into a group of guys wearing BYU shirts. It was good to see some fellow saints. We hung out for a few minutes. They looked and talked like they were from Utah County. Don’t ask me how I knew…I just knew. 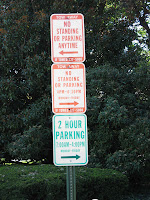 As I walked back to the street where my motorcycle was parked, I noticed that all the cars and motorcycles, except mine, that were parked along that street were now gone and where they were was a rush hour lane for traffic. I didn’t really pay close attention to the parking sign right next to where I park my motorcycle. There was a ticket stuck in the seat of my bike that fined me $100 and had a notice that said “Towing Requested.” I was glad to pay the fine and not have my bike towed away, which would have cost a lot more. I was also grateful that the traffic didn’t run my bike over. 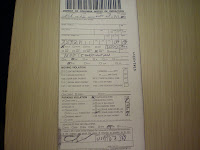 The end of another eventful day…good night, I’m tired.