Our time in Palmyra came to an end this morning, as we packed up to head our separate ways; Penny and Jennica on a plane bound for Salt Lake and myself back on the iron horse, “The Blue Pearl,” headed for Philadelphia. 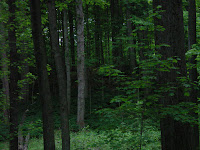 We took some time this morning to walk one last time through the Sacred Grove. As always, it was peaceful and beautiful. The words of the Hymn, “Joseph Smith’s First Prayer,” came to mind: “Oh, how lovely was the morning! Radiant beamed the sun above. Bees were humming, sweet birds singing, Music ringing thru the grove…” I’m going to miss The Grove. 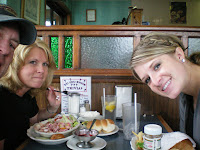 After checking out of our hotel, we decided to have lunch one last time at the local diner. They have just about everything on their menu, and a cup of grease to go with it.

It was difficult to say goodbye to Penny and Jennica. We had such a wonderful time together. Our testimonies grew over the last couple of days, as well as our love for each other. I memorized my parting kiss with Penny, hoping it will last through the next 10 days. Leaving Palmyra, as we reached the Interstate, I headed east, as Penny and Jennica headed west to the Buffalo Airport. 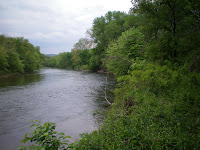 After 175 miles, heading southeast through some beautiful green countryside, I arrived in Harmony (Now Oakland), Pennsylvania, and the Susquehanna River. This is the place where John the Baptist appeared to Joseph Smith and Oliver Cowdery, and restored the Aaronic Priesthood back to the earth through them, as well as the place of the first baptisms in this dispensation, when the angel commanded Joseph and Oliver to baptize each other.

As I was the only one there, it was a quiet, peaceful time for me to reflect upon the events that took place here. 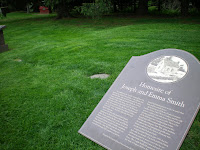 There are only a few foundation stones left of the home that Joseph and Emma had built. It is stiuated next to the Harmony Cemetery where the graves of Alvin (Joseph and Emma’s baby who died shortly after birth), and Isaac Hale (Emma’s father), are located.

Joseph and Emma had moved here in December of 1827 to escape persecution. It was in Harmony that the first translation of the Gold Plates took place, with Emma acting as scribe for a short time, before Martin Harris came down from New York, during April to June of 1828, to serve as scribe for the first 116 pages of the Book of Mormon.

After those pages were lost, Oliver Cowdery served as scribe beginning in early April of 1829. Most of the translation of the Book of Mormon took place in Harmony, as well as 15 revelations that Joseph received from the Lord and later published in the Doctrine and Covenants.

I was told by one of the senior missionaries in Palmyra, that the church has plans to start the reconstruction of the Joseph and Emma home in Harmony, sometime next year.

After my short visit in Harmony I was back on the road towards Philadelphia, and got as far as Valley Forge at around 8:00 PM, and decided to stay there for the night.

And guess what? I found another Motel 6…and the lights were still on.