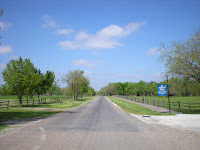 As I left Nauvoo this morning, I drove back through the old city one last time, and stopped on Parley Street. This street is the longest street in Nauvoo, and was the street in which all the departing saints traveled to the water’s edge of the Mississippi to cross to the Iowa side as they began their trek westward. 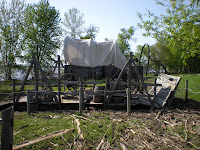 In the concluding dedicatory session of the Nauvoo Temple, President Hinckley made a special request of those in attendance in Nauvoo. He asked everyone to take a few minutes to “walk down Parley Street to the waterfront.” He asked members to walk along this sacred path and take time to read the plaques along the Trail of Hope (Originally known as the “Trail of Tears”). There are thirty markers that contain quotes from journals and letters of the early pioneers as they got ready to begin the great trek to the Rocky Mountains. Hundreds of wagons would line up on this street waiting their turn to cross. 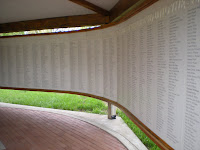 It is simply amazing how much they sacrificed and left behind as they pushed west. They had given much to partially build the Nauvoo Temple, to then leave the unfinished structure behind them as they journeyed into an unknown territory. But, they had unwavering faith in their new leader, Brigham Young.

At the end of Parley Street stands a memorial wall to the nearly 4,000 pioneers who died along the Mormon Trail. One cannot help but feel a special sacredness as you stand and read the names listed. 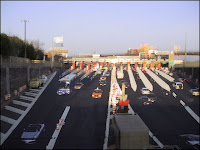 My journey today took me across Illinois, past the lower tip of Lake Michigan and into Indiana. As I entered Indiana I was abruptly introduced to their toll roads. I-80, which up to this point had been free, all of a sudden cost to travel it. I felt confused as I drove up to the booth and read the sign “Take a ticket.” “Now what do I do with this,” I asked myself as I drove away and put the ticket in my pocket.

After driving for about 30 minutes, my left hand started getting cold, and I noticed that I had unplugged my heated glove to obtain the toll ticket. So I looked for the next exit to pull off and plug it back in. As I exited I then learned what the ticket was for. I had to pay to get off the freeway, or rather the tollway. I told the lady at the exit toll booth that I only needed to get off for a split second to plug my glove in and be back on my way on I-80. She told me that I needed to go through the booth, pay 75 cents, make a U turn and then take another ticket to get back on I-80. I told her that in Utah I could get off I-80, plug my glove in and get back on I-80 without costing me a dime. She kindly informed me that this isn’t Utah and that I can’t do that in Indiana.

So I smiled, paid my 75 cents, plugged in my glove, hung a U turn, grabbed another ticket and drove off with stupid written all over my forehead, driving as far as South Bend Indiana, to then pay another 75 cents to get off I-80 so I could find a hotel for the night.

I got even with the toll booth lady, though…I checked into a Motel 6 for $31.99, figuring I saved my 75 cents twice over, and then some.