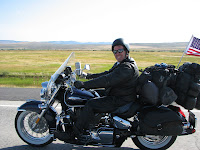 It was a beautiful Monday–Skies were clear, temperatures were warming. I had a meeting in Provo, so I decided to ride my motorcycle down from Sandy.