As you probably figured out, from my short and to the point post last night, I was pretty worn out. What I failed to mention, or rather confess, was that I became a turncoat last night. Let me explain.

As I was approaching Indianapolis last night, and was about 20 miles just east of the city, I started having this discussion with myself about whether or not I should go into Indianapolis and find a room (Motel 6), or just stop at the next town and find a room. I was pretty tired, and thought it best to pull over in the next town. So I did. Well, to my shock and amazement, there was no Motel 6 in the city of Greenfield, Indiana. I was going to have to settle on something else, so I picked the Super 8 Motel. (Not sure what the 8 represents?) As I approached the front desk, sunburned and tired, I asked the clerk how much his rooms were. He said that because of the Indianapolis 500 this weekend, they had a higher rate of $110, and only had one room left. He said all the rooms in Indianapolis were booked, as well as everything between here and there. I had no idea that the 500 race was going on this weekend.

I told him that I had just traveled 600 miles on my motorcycle today and would probably pay double his price for the room. I think he could see that I was pretty spent and felt sorry for me, so he discounted the room and gave it to me for $80 bucks.

The Super 8 Motel (Did I say I wasn’t sure what the 8 stood for?), had an indoor pool and hot tub, a king size bed (with a memory foam top, I might add), a free breakfast, all the free popcorn I could eat, and the manager let me park my motorcycle under their front canopy for the night.

So here’s my confession. I now like Super 8 Motels more than Motel 6. Sorry Motel 6…You did leave the lights on for me, and I really did appreciate that. But, I really like my hot tubs at night, not to mention, all the popcorn I can eat and the bed was, well, let’s just say when I fell asleep at the Super 8 Motel, I didn’t remember a thing until I opened my eyes the next day. Of course, I was pretty tired. 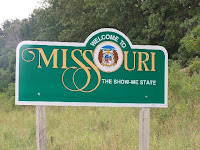 So this morning, as I awoke, it was the Sabbath day. I don’t know if it was because of the day, or just the fact I was headed west, I felt this strong impression that I should head for Jackson County, Missouri for “The Gathering,” and so I did, expecting to meet other saints who had been summoned to gather. But upon my arrival, and to my great surprise, I was the only one. Go figure!

Before leaving this morning, as I have done every morning, in my morning prayer, I asked the Lord to protect me in my travels. 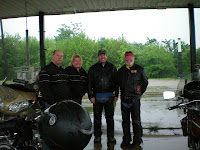 After driving through the second severe thunder storm of pelting rain today, it dawned on me that I should have been more specific in my prayer. (The picture on the left, are some new friends I made while waiting out one of the thunder storms) So as I was driving through the second thunder storm, I said a silent prayer and asked the Lord to please temper the weather. I no sooner said that, and I noticed a clearing in the clouds straight in front of me. The rain stopped and never rain on me the rest of the day. That was a testimony to me of the power of prayer.

Speaking of prayer; I know that a lot of you have been praying for my safety on this trip. I have certainly felt your prayers. But, something I need to share with you. While I’m traveling on my motorcycle, I have a lot of time to think and ponder. Well today, as I was pondering, there were two things that have been unique on this trip. One; I have not had any close calls with motorists either turning in front of me or cutting me off. That is really unusually, as with my trips two and from Provo; I usually have two or three incidents of being cut off or turned in front of. Two; when I first began my trip, leaving Utah and going into Wyoming, I noticed a freeway electronic marquee (The ones that normally post the Amber Alerts) with the message “Watch for Motorcyclists, and Give them Room.” At the time, I thought that was nice, as I was one of the motorcyclists they should look out for. Well, every single state that I drove through on this trip has had that message on their marquees. The thought occurred to me today that perhaps your prayers have put that message on those marquees for my safety. Anyway, thanks for the prayers. Keep them coming.

I spent two hours at the Independence Visitor’s Center tonight. I’ll include my visit in my post tomorrow, as it is getting late, and though I’m not as tired as last night, I’m still tired.

Places I will be visiting tomorrow will be Adam-ondi-ahman, Liberty Jail, Haun’s Mill and Far West.