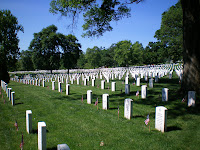 As the sun rose in the eastern sky this morning, I walked the grounds of the Arlington Cemetery. I visited John F. Kennedy’s gravesite, with the eternal flame burning. 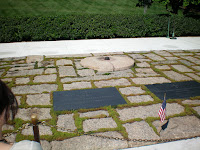 On my way to the tomb of the unknown soldiers, I passed the large and magnificent headstones of the generals and colonels, of the various wars, who were buried there, and thought about the simple grave stone of Joseph Smith in Nauvoo. There was no greater man, save Jesus only, than Joseph. 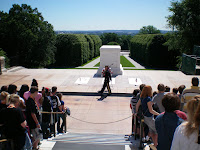 The Tomb of the Unknown Soldier had a quiet reverence about it. I watched as the Honor Guard, adorned in his neatly pressed uniform, took exactly 21 steps from one end to the other, stopping and facing the tomb for twenty-one seconds, and then repeating this duty until he was relieved from his post thirty minutes later. 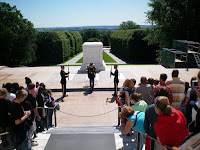 The twenty-one is in representation of the twenty-one gun salute, the highest honor given in the military. The tomb has been guarded every minute of every day since 1937. As I removed my hat from my head out of respect, I had an overwhelming feeling of gratitude for the price of my freedom. 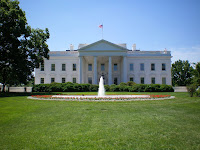 It was then off to the White House. For two hundred years The White House has stood as a symbol of the Presidency, the United States Government, and the American People. Its construction was completed in 1800, with President John Adams, along with his wife Abigail, being the first US president to occupy it. Some interesting facts: There are 132 rooms, 35 bathrooms, and 6 levels in the Residence. There are also 412 doors, 147 windows, 28 fireplaces, 8 staircases, and 3 elevators. With five full-time chefs, the White House kitchen is able to serve dinner to as many as 140 guests and hors d’oeuvres to more than 1,000. For recreation, the White House has a variety of facilities available to its residents, including a tennis court, jogging track, swimming pool, Movie Theater, and bowling lane. 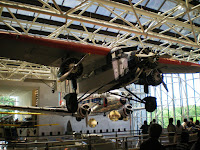 I then spent most of the afternoon in the Smithsonian Institute Museums. The National Museum of American History was closed for restoration, but I was able to walk through the Museum of Natural History and the National Air and Space Museums.

I concluded my day visiting the Thomas Jefferson Memorial, the US Marine Corps Memorial and pondering if George Washington really threw a silver dollar across the Potomac River. 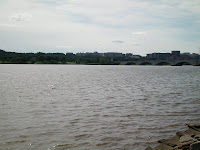 First of all the river is quite wide and probably not possible, and secondly, I understand it to be another myth, along with chopping down the cherry tree, concerning George Washington. 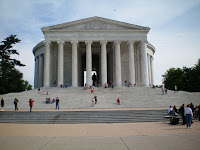 Thomas Jefferson, our third president, was one of the most influential founding fathers for his promotion of republicanism in the United States. He played a vital role in the Declaration of Independence, as its primary author. 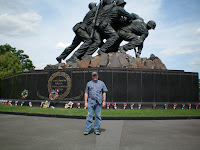 The Marine Corps War Memorial stands as a symbol of this grateful Nation’s esteem for the honored dead of the U.S. Marine Corps. While the statue depicts one of the most famous incidents of World War II, the memorial is dedicated to all Marines who have given their lives in the defense of the United States since 1775.

The story behind the statue goes like this: On the morning of February 19, 1945, the 4th and 5th Marine Divisions invaded Iwo Jima after a somewhat ineffective bombardment lasting 72 hours. The 28th Regiment, 5th Division, was ordered to capture Mount Suribachi. On the morning of February 23, Marines started the tortuous climb up the rough terrain to the top. At about 10:30 a.m., men all over the island were thrilled by the sight of a small American flag flying from atop Mount Suribachi. That afternoon, when the slopes were clear of enemy resistance, a second, larger flag was raised by five Marines and a Navy hospital corpsman: Sgt. Michael Strank, Cpl. Harlon H. Block, Pfc. Franklin R. Sousley, Pfc. Rene A. Gagnon, Pfc. Ira Hayes, and PhM. 2/c John H. Bradley, USN.

Well this concludes my stay in Washington DC. I felt honored to walk the halls and the grounds where our Founding Fathers walked. We owe a lot to them, as well as our service men and women, for their dedication in establishing and guarding our independence and freedoms.

Tomorrow I will point my motorcycle towards the west and eagerly start for home.