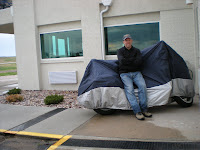 I started my trek from Salt Lake at 6:30 AM this morning, with a light rain, and a temp of about 42 degrees. Taking my journey on I-80, heading east, I reached Evanston with a temp of 35 degrees. It pretty much stayed in the high 30’s until I reached Rawlins, Wyoming. Just outside of Rawlins, it really started to rain, and it followed me most of the way through Wyoming and into Nebraska. Wyoming, and for the most part, Nebraska, were pretty must wide-open boring rides. At one point in Nebraska, it started to hail, so I pulled off the road under an overpass, with two other vehicles. As I was waiting out the storm, I started a conversation with one of the vehicles, a guy from Nebraska, who had his radio tuned into the weather report. A tornado alert came on and said that a tornado had just touched down about 20 miles in front of us on the interstate. That got me pondering the importance of timing.

My favorite song that I sang to myself many times today: “Home on the Range.” (Fitting)

After 12 hours on the road, I checked into a motel 6, who always “leaves the lights on” for you. But, in this case, the electricity was out, and no lights on. Just my luck. I wasn’t about to climb back on my bike and dodge tornados to get to the next town. So I told the desk clerk that I didn’t care if they had no electricity, as long as they had a bed and a room that didn’t have any storminess, I was content.

So that is pretty much my first day. I’m going to now relax and watch the Jazz get beat by the Lakers. See you tomorrow.

Side note: The people I have met along the way in Wyoming and Nebraska were all pretty friendly. One thing I did notice was that there probably are not many dentists in these two states, as most of the people I talked to were missing a few teeth, and the remaining teeth hadn’t been brushed for a couple of years… Nice folks, though.